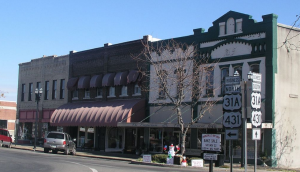 Spring is here and the weather is beautiful. Maybe you haven’t found it necessary to turn on your Air Conditioner yet. The Summer months are ahead of us and weather specialists predict a hot one! Have you taken a moment to consider making sure your Air Conditioner is going to perform? We can perform service checks and full maintenance on your air conditioning unit to make sure it’s in top shape for peak performance this year! For Lewisburg, TN Air Conditioning Repair and Installation, Hometown Comfort has got you covered. Of course we service Brentwood, Franklin, Columbia, and the surrounding areas as well. Lewisburg, TN holds a special place in our hearts. There’s not just one reason we love Lewisburg. It’s because of the beautiful rolling hills, the quaint town square, and the nice, Southern people we always meet there.

A bit of Lewisburg, TN History

Long before the times of Air Conditioning, the history of Lewisburg began. Lewisburg is located in Marshall County and was of course originally settled by Native Americans. Revolutionary War Veterans were awarded land in the Lewisburg area by North Carolina following the war, in the 1780’s. Did you know that 3 of the State of Tennessee Governors hail from the area as well? That’s right, Henry Horton operated a farm and a Mill in Marshall County, right on the Duck River. Jim Nance McCord had roots in Lewisburg as well. His wife was from there and his brother owned a book store in Lewisburg. He even served as Mayor of Lewisburg from 1916 to 1942, and was the publisher of the Marshall Gazette! Buford Ellington, governor of Tennessee from 1967 to 1971, served the Tennessee House of Representatives from Marshall County’s seat in the late 40’s and early 50’s. Of course, in those days residential and commercial Air Conditioning was a fairly new concept.

Around the 1920’s, air conditioning was put into production for residential use. It helped advance the population in the warm, southern states and created a great migration in the United States. Still, it was only in 10% of homes as late as the 1960’s according to the Carrier Corporation. To help fight the heat, many Southern Families would sleep on the front porch or pour water on the wood floors before bedtime. By the end of the 20th century, nearly 86% of all homes had some sort of air conditioning from window units to the more modern Central Heat and Air units.

Whether you’re dealing with an older unit or you’re looking for a quality maintenance technician, the important thing is to make sure you’re prepared to stay cool this Summer. For Lewisburg, TN Air Conditioning repair and service, the choice is easy! Call us at 615-948-2667 and let Hometown Comfort make sure you’re in tip-top shape this year. Be sure to check out our reviews and even take 10% off your initial service with our current special offer—while it lasts!

Visit this page to take advantage of this great offer. We look forward to hearing from you!